Love is the Devil: Study for a Portrait of Francis Bacon (1998) 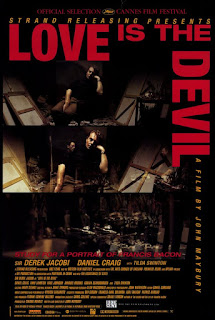 Maybury’s film about the relationship between the painter Francis Bacon (a revelatory Derek Jacobi) and his lover, small-time crook George Dyer (Daniel Craig), is an overtly arty piece of cinema. It opens with Bacon mourning Dyer’s death – then flashes back to Dyer literally falling into the picture (Maybury films Craig falling through darkness over the credits) before crashing through Bacon’s skylight during a bungled robbery. Here to rob the joint, he ends up getting invited to bed. So Dyer stays on as live-in lover, model and odd-job man.

Maybury’s plans for making a film about Bacon looked like they had been scuppered early, when the Bacon Estate refused permission for a single Bacon to actually appear in the film (there are a few ersatz Bacons at the edges of frames). Maybury gets around this ingeniously: he effectively turns the entire movie into a massive Bacon painting.

Rarely have fish-eyed lenses been used so much. They are all over scenes here, distorting and ballooning faces. Maybury uses shots through pint glasses and lightbulbs to bend images. The lighting (brilliantly shot by John Mathieson) recreates the visual discomfort of Bacon’s work and his use of block background colours (particularly reds and browns). Famous Bacon flourishes are reproduced – lightbulbs and mirrors appear particularly prominently. We may not see Bacon paint, but we watch him paint himself (brushing his teeth with Vim, using spit to curve his eyelashes), all while staring into a three-surface mirror – becoming his own Triptych.

The tragic Dyer even dreams in Bacon paintings: haunted by a crouching flayed man on a diving board (a dark twist on the paintings Bacon would make of him after his death). Dyer even ends the film literally consumed by Bacon’s work – he exits his hotel room into a dreamy reconstruction of Bacon’s Triptych in Memory of George Dyer, effectively recreating the painting in motion before ending it slumped lifelessly forward. It’s a neat visual image for a theme that runs throughout – the weak, pathetic Dyer is consumed by Bacon so completely, he literally becomes a painting.

Poor George Dyer. It’s hard not to feel sorry for such a weakling, hopelessly out of his depth. Craig’s performance as an incompetent, strangely innocent (“Do you actually make a living from painting?”) petty crook and alcoholic is perfect – a fine reminder of what a great actor he is. He’s mostly a silent passenger when Bacon socialises with the hoi polloi, but this makes it even sadder to see him attempt to take on Bacon’s “life of the party” expressiveness later when regaling his working-class friends, limply imitating Bacon’s “cheerio” as he downs another glass of champagne.

This film doesn’t shy away from the dark destructiveness of the relationship: or from exploring Bacon’s promiscuous sexual masochism, and his emotional sadism. Several sex scenes are modelled after Bacon’s paintings. The roughness of the sex is constantly at the forefront. If you’ve ever wanted to see a naked James Bond preparing to beat a prone, topless Brother Cadfael with a belt, then this is probably the film you’ve been waiting your whole life to see.

Many of the film’s successes are due to Craig – and to Jacobi, who is a revelation in the best film role of his entire career. Not only is he strikingly physically similar to Bacon, but he attacks the part with a waspish bitterness and cruelty, giving a dominant performance of Bacon’s selfishness and malice. The small moments of painting we see are performed more like fights then acts of creation. However, Jacobi allows enough moments of sensitivity – the hints of sadness and regret he feels after another act of dismissive cruelty, the small touches of affection intermixed with rejections. The film makes clear Bacon was an abusive partner, and Jacobi’s performance projects all the dark charisma you could possibly want.

So why isn’t the film better regarded? The answer is there at the top: this is an overtly arty film, in many ways a commentary on the artist and his work rather than a drama. Its visual dynamism is impressive, but wearing. It’s frequently not subtle – if you were in any doubt about Bacon’s semi-sexual arousal at violence, we get to see his jubilant reaction to blood being sprayed across his face at a boxing match. Later Jacobi waxes lyrical over the beauty of a car crash while the camera pans across twisted bodies. The edgy, distorting style and overbearing dirtiness of the action may be true to much of the tone and style of Bacon’s work – but it’s hardly a bundle of fun to watch.

Love is the Devil may get close to an understanding of what drove Bacon, and what lies underneath his art – but it goes about it a very self-important way, in a film that often feels a little too pleased with itself. Craig is very good, and Jacobi an absolute revelation – but it doesn’t change the fact that the film is almost deliberately alienating and difficult. Few other characters (including an unrecognisable Tilda Swinton) get much of a look in, and the claustrophobic focus finally starts to wear the viewer down. It’s a must for admirers of Bacon (though you’ll be hard pressed to admire the man after viewing this!), but it’s a film that delights a little too much in being difficult to watch.
Email ThisBlogThis!Share to TwitterShare to FacebookShare to Pinterest
Labels: 1998, Artist biography, Biography, Daniel Craig, Derek Jacobi, John Maybury, Tilda Swinton