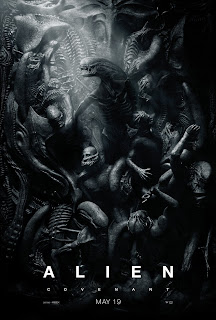 The Alien franchise is a series I’ve always had a lot of time for. Perhaps I just enjoy the carnage and blood letting of these movies, but at their best there is a sinister poetry behind the pure destructiveness of this rampaging beast, with a perfect mix of haunting nihilism and stirring action. In 2012, Scott returned to the franchise to explore its roots. His prequel film, Prometheus, had a mixed reception (and it’s a film I’ve found weaker with repeated viewings) but it still had that mixture of nihilistic poetry and gore. So where does Alien: Covenant fall?

Set 10 years after Prometheus, a solar flare hits the colony ship Covenant. To repair the damage, the ship’s android Walter (Michael Fassbender) wakens the crew, although the captain (an unbilled James Franco) is killed by a malfunction. Command passes to Oram (Billy Crudup), although many of the crew look to the captain’s wife Daniels (Katherine Waterston) as their moral leader. After the damage is repaired, the crew investigate a signal from an abandoned world, where they find the marooned android David (Fassbender again) and a planet with a terrible virus, that infects its hosts to create brutal Xenomorph monsters. But is all as it seems?

Alien: Covenant is a mixed bag. It has a haunting and unsettling tone and gives us plenty of aliens in all their various forms. Many of the sequences of alien attacks are exciting. It’s trying to build a mythology around the creation of the aliens, and tie that in with a thematic exploration of our needs to create and destroy. It wants to explore the potential dangers of artificial life, and how it could judge us and find us wanting. At the same time, it’s a flawed and rather predictable film, which never really surprises you. It might give you some things to think about – but it won’t provoke your interest enough to make you really think about them for long after the credits roll.

Its main weakness is in its large cast. Most of the characters are referred to throughout by non-descript surnames, hammering home their lack of individuality. The film is so resolutely invested in the establishment of its mythology, it has no time to build characters or a story around the crew. They are little more than ciphers, plot tools to deliver specific points rather than for us to relate to them, or feel concern for their fate. Even Waterston’s Daniels, nominally our surrogate character, feels distanced and undefined. Like the rest of the cast, she suppresses the loss of a loved one (there are at least three bereaved partners in this film) with a suddenness that speaks less of her professionalism and more of the film’s shark-like need to always moving forward.

The one exception to the blandness is Fassbender’s dual role as androids David and Walter. It’s an actor’s bread and butter to play different roles, so we shouldn’t be surprised that a great actor like Fassbender executes it here with such skill. But he clearly distinguishes both the loyal, straightforward Walter and the darkly oblique David, and manages to craft the two most impressive performances in the film. This also gives Fassbender several chances to act oddly with himself, including a scene where David (rather suggestively) teaches Walter to play a pipe (it’s all about the fingering) and even a creepily possessive kiss scene between the two androids.

It helps that the film positions David as a protagonist-antagonist, and spends time exploring his fractured psyche (because it is central to the creation of the aliens, the film’s main interest). From its dark prologue, which shows David awkwardly questioning his nature with his creator (a swaggering cameo from Guy Pearce), David carries much of the film thematic interest. He is a creation of mankind, who believes he has surpassed his creators. Learning that Walter, a second generation, has been programmed to be less 'human' in his emotional capability as David, only confirms his belief that he is perfect. David is fuelled by a homicidal rage towards his creators, matched with an insane fixation on his own perfection. 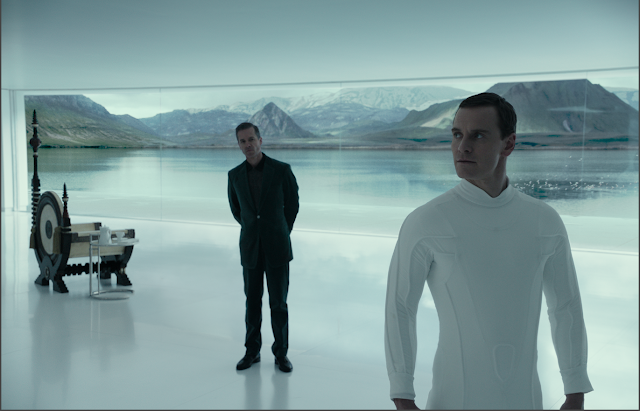 The film wheels out a host of literary big guns to suggest a richness and depth to its exploration of these themes, from Milton to both Shelleys, but these points are really window dressing, as David is really closer in spirit to a Mengele crossed with a mad scientist from an old Hollywood B-movie. Despite this though, Fassbender’s David feels like a fully-rounded, absorbing character. His ‘Walter’ performance is equally good – gentler, compassionate, less grandstanding but quietly engaging.

Alien: Covenant is a film that aims high and wants to add some intellectual heft to its “slasher” roots. I think it’s probably a film that “hangs out” with ideas rather than enters into a proper conversation with them, but at least it’s aiming for thematic depth and richness, even if it often misses. I’m not sure it carries the sense of wonder and awe, and near-religious parallels, Prometheus (a deeply flawed, but more haunting film than this) managed. But it wants to make us question our place in the universe, and how our blind overconfidence could one day doom us. These ideas may just be window dressing to the blood and guts that the film delights in, but it at least shows that Scott is trying to make something a little deeper, and trying to make points about human nature.

It may be this focus on philosophical musing and the mythology of the alien’s development, distracted the film-makers from creating a plot to wrap around all this. The characters actions are too are often determined by the requirements of the plot, rather than logic or characterisation. So many dumb decisions are made, it stretches credibility: deflecting on a whim to a strange planet, charging around this alien world with careless abandon, following a clearly demented android you don’t trust into a room full of alien eggs – the plot requires each of the characters to perform various acts of stupidity in order for it to get anywhere.

The plot is also a hybrid that remixes beats from the previous films. No death (and there are loads of them) carries any surprise or shock value, and the alien itself (impressively filmed as the action is) behaves pretty much as you would expect. The familiarity of the events also makes the characters feel (to the audience) even more stupid and careless. There is excitement, but the film never really gets you to the edge of your seat – with its familiar action, and bland characters most of whom are little more than alien-fodder, you just never feel a tension or investment in their fates.

I wanted to like Alien: Covenant more than I actually did – but the truth is that it’s a film that lets itself down. There are moments of awe and wonder in there. It has a very good villain, whose motives and reasoning are interesting and thought-provoking. It has a terrific pair of performances by Michael Fassbender. But it’s also got too much flatness – plot and characters seem rushed and thinly sketched out. It’s clear where Scott’s and the writers’ focus was – and it means chunks of this movie just glide past the eyes and ears. Not the worst Alien film by a longshot – but still someway off the greatness of the first two films.
Email ThisBlogThis!Share to TwitterShare to FacebookShare to Pinterest
Labels: 2017, Alien films, Billy Crudup, Carmen Ejogo, Danny McBride, Demian Bichir, Guy Pearce, Horror film, James Franco, Katherine Waterston, Michael Fassbender, Noomi Rapace, Ridley Scott, Science fiction