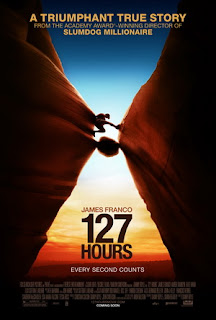 Even people who’ve never heard of Aron Ralston, surely know this as “that film where James Franco cuts his arm off” (as my wife called it when I said I’d watched it). But, with the inspired direction of Danny Boyle and brilliant performance from James Franco, this is so much more than just a film about cutting an arm off.

Aron Ralston (James Franco) is an adventurous free-spirit, who loves nothing better than solitary journeys in isolated places. He’s asking for trouble – and ‘Ooops!’ (as he puts) one day he gets it, falling into a crevice where his arm is crushed in place by a boulder. Ralston is trapped for 127 hours, with limited food and water and only the contents of his rucksack to help. There is no chance of anyone finding him for weeks. Eventually the only option left for Ralston is the unthinkable: to disconnect his body from his trapped (and already dead) arm.

Possibly only Danny Boyle could make a film as dynamic, visually exciting and fun as this, about a man who spends the entire time stuck behind a rock. Ralston is such a vibrant personality that Boyle’s visual inventiveness works perfectly for the material. Boyle finds a host of brilliant angles and editing tricks to film, not only Ralston’s trapped positon, but also the host of day dreams and (increasingly) hallucinations Ralston experiences.

The film doesn’t rush us into Ralston’s trap either. The first 20 minutes show Ralston’s life as he lives it – independent, friendly, adventurous and essentially focused on himself. It also shows us how exciting and fun exploring can be – something we really need to know, so as not to think “Why are you even doing this, you idiot!” later.

When the event happens (and the film mines a lot of good-natured tension as we constantly wait for it to happen) it’s both sudden and low-key. Ralston’s first reaction (and yes it’s partly shock) is surprised irritation. Then the film swiftly tightens in on the small world this adventurer is now restricted to. The crevice, the boulder, a strip of sky, the contents of his rucksack - all of which (despite his best efforts) are inadequate for getting him free. Boyle’s immersive skill in staging Ralston’s claustrophobic position is so great that you feel the same unnerved surprise as Ralston does when he is finally free, after watching him fixed in place for over an hour.

The film gets a certain dark humour from the foreknowledge almost anyone watching has. Some of the very first shots, show Ralston’s hand reaching into a cupboard looking for his pen knife (the want of which he later heavily regrets), the knife close to the camera, just out of Ralston’s casual reach. Later, there is an extra agony watching him chip away uselessly at the rock (with a utility knife he establishes is not sharp enough to cut his thumb), knowing every blow is making this knife blunter and blunter –making what we know he will have to use it for later harder and harder to do.

Ralston finds himself in an impossible situation (from his own hubris and overconfidence), but not only keeps hold of his sense of hope and humanity but also makes profound discoveries about himself and his life. That’s the focus Boyle keeps his story on – and each of the flashbacks and hallucinations focus on Ralston reviewing his past mistakes he’s made and reflecting (without heavy handed dialogue) on how (if he escapes) he could change his life.

A lot of the film’s success is based on James Franco’s exceptional performance. It’s is as alive and throbbing as the movie, and he really understands the charismatic fire in Ralston, the egotism and cockiness matched with resourcefulness and determination. He’s every inch the guy cocky enough to go it alone in the wilderness, and skilled enough to explore every angle for escape. He’s not an idiot, but not a hero – he’s a guy who grows to understand mistakes he has made, while never wallowing in self-pity, who can make the kind of calls most of us would find unthinkable.

As for that scene? Well yes it’s tricky to watch (to say the least), but not because it’s graphic or unpleasant – but because Boyle makes carrying out such an act so logical, so necessary, that you look down at your own arm and wonder if you would have the guts to do the same. The premonition Ralston reported of seeing his own yet-to-be-conceived son, giving him the determination to do the deed, is staged by Boyle with a dreamy lyricism. This is picked up in AR Rahman’s score, which slowly build in intensity to consume the scene. As Ralston cuts each of the nerve endings in his arm, the music jars in a way that tells us more about pain than any level of screaming would do.

So yes the central event is hard to watch – but this is not exploitative or gross-out. Instead it’s a rich, rewarding and engaging film, dynamically filmed – for a film about a guy trapped in one place, it constantly feels like it is on the move. It’s a story about the human spirit, and how we can conquer impossible odds – especially when we feel, as Ralston did, that he wasn’t doing this just for himself but for his family. Far from an endurance trip, this is a heartfelt and moving story that left me feeling uplifted. I think it might be Boyle’s best film since Trainspotting.
Email ThisBlogThis!Share to TwitterShare to FacebookShare to Pinterest
Labels: 2010, Amber Tamblyn, Biography, Clémence Poésy, Danny Boyle, James Franco, Kata Mara, Kate Burton, Lizzy Caplan, Survivalist films, Treat Williams