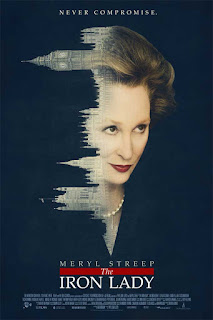 In British politics has there been a figure as controversial as Margaret Thatcher? A domineering Prime Minister who reshaped the country (for better or worse depending on who you speak to), crafting a legacy in the UK’s politics, economy and society that we will continue to feel for the foreseeable future, she’s possibly one of the most important figures in our history. It’s a life rich for a proper biographical treatment; instead, it gets this film.

The film’s framing device is focused on the ageing Thatcher (Meryl Streep), now dealing with onset dementia and having detailed conversations with her deceased husband Denis (Jim Broadbent). Cared for by her daughter Carol (Olivia Colman), she reflects on her political career and the sacrifices she made personally to achieve these. Woven in and out of this are Thatcher’s increasingly disjointed memories of her political career.

The most surprising thing about this film is how little it actually wants to engage with Thatcherism itself. Perhaps aware that (certainly in the UK) Thatcher remains an incredibly divisive figure, the film’s focus is actually her own struggles with grief and approaching dementia. Her career as PM is relegated to a series of flashbacks and short scenes, which fill probably little more than 20-30 minutes of the runtime, shot and spliced together as a mixture of deliberately subjective memories and fevered half-dreams. Can you imagine a film about Thatcher where Arthur Scargill and the miners’ strike doesn’t merit a mention? You don’t need to: thanks to The Iron Lady it now exists.

Perhaps Thatcher’s politics were considered to “unlikeable” – certainly, one imagines, by its writer and director – to be something to craft a film around, so it was thought better to brush them gently under the table. Instead the focus is to make Thatcher as sympathetic as possible to a viewer who didn’t share her politics, by concentrating on her struggles against sexism in the 1950s and her struggles with age late on. Why not accept what Thatcher stood for and make a film (for better or worse) about that? Perhaps more material on her actual achievements in office were shot and cut (the film does have a very short run time and underuses its ace supporting cast), but the while film feels fatally compromised picture – which is more than a little ironic since it is about a woman famous for her lack of compromise.

In fact it’s rather hard to escape the view that Roger Ebert put forward: “few people were neutral in their feelings about [Thatcher], except the makers of this picture”. It’s a film with no real interest in either politics or history, the two things that defined Thatcher’s entire life. And as if to flag up the mediocre nature of the material they’ve chosen, it’s then interspersed with too-brief cuts to more interesting episodes from Thatcher’s life than those we are watching. Only when the older Thatcher hosts a dinner party and launches into a blistering sudden condemnation of Al-Qaeda and support of military action against terrorism (followed by her casual disregard of a hero-worshipping acolyte) do we ever get a sense of finding out something about her, or of seeing her personality brought to life.

The film’s saving grace is of course Meryl Streep’s terrific impersonation of Thatcher. I call it impersonation as the film so strenuously avoids delving into the events and opinions that shaped Thatcher that Streep gets very little opportunity to really develop a character that we can understand, or to present an insight into Thatcher. Her performance as the older Thatcher – losing control of her mannerisms, deteriorating over the course of the film – is impressive in its technical accomplishment, but that’s largely what it remains. As the film doesn’t allow us to really know Thatcher, and doesn’t work with what defines her, it largely fails to move us when we see her weak and alone. So for all the accomplishment of Streep’s work, I couldn’t say this was a truly great performance – certainly of no comparison to, say, Day-Lewis as Lincoln or Robert Hardy as Churchill. I’d even say Andrea Riseborough’s performance in TV’s The Long Walk to Finchley told us more about the sort of person Thatcher was than Streep does here.

Despite most of the rest of the cast being under-used though, there are some good performances. Jim Broadbent is very good as Denis Thatcher, although again his performance is partly a ghostly collection of mannerisms and excellent complementary acting. However the chemistry between Streep and him is magnificent and accounts for many of the film's finest moments. Olivia Colman does sterling work under a bizarre fake nose as a no-nonsense Carol Thatcher. From the all-star cast of British actors, Roger Allam stands out as image-consultant Gordon Reece and Nicholas Farrell is superbly calm, cool and authoritative as Airey Neave. Alexandra Roach and Harry Lloyd are excellent impersonating younger Thatchers.

The Iron Lady could have been a marvellous, in-depth study of the politics of the 1980s, and a brilliant deconstruction and discussion of an era that still shapes our views of Britain today. However, it wavers instead into turning a woman defined by her public role and views into a domestic character, and brings no insight to the telling of it. By running scared of Thatcher’s politics altogether, it creates a film which makes it hard to tell why we should be making a fuss about her at all – making it neither interesting to those who know who Thatcher is, nor likely to spark interest in those who have never heard of her.
Email ThisBlogThis!Share to TwitterShare to FacebookShare to Pinterest
Labels: 2011, Anthony Head, British Films, Iain Glen, Jim Broadbent, Meryl Streep, Nicholas Farrell, Olivia Colman, Phyllida Lloyd, Political dramas, Richard E. Grant, Roger Allam