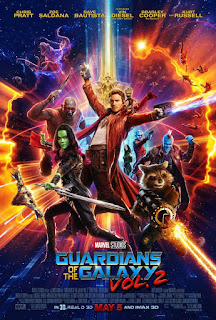 In 2014, Guardians of the Galaxy was expected to be Marvel’s first flop: an odd collection of ridiculous looking characters, from a comic book few had ever heard of. Instead, its oddball charm and wit made it one of the most popular in the franchise. This is the tricky second album, which has to deliver more of the same while trying to build on the first film.

Set a few months after the first film, the Guardians are left stranded on an alien planet after a job for elitist race The Sovereign (led by a drily witty Elizabeth Debecki) goes badly wrong. They are saved by Ego (Kurt Russell) who reveals himself as Peter Quill’s long-lost father. Quill (Chris Pratt), Gamora (Zoe Saldana) and Drax (Dave Bautista) follow Ego to his homeworld, while Rocket (Bradley Cooper) stays to repair the ship with their captive Nebula (Karen Gillan). While Ego’s world hides a range of dangers, Rocket and Nebula come under attack from Peter’s former guardian Yondo (Michael Rooker), whose pirates have been hired to capture the Guardians.

First the good things: this is a very entertaining film, packed full of funny lines and entertaining moments, solidly acted (with some stand-outs) by a cast who are able to communicate their enjoyment with the audience watching. Like the best of the Marvel films, it focuses on a core cast and establishes an audience bond with their characters very swiftly, and care about their fate. The focus of the film is actually skewed in favour of character over plot and action, which makes a nice change from many of these films (the action quotient is actually fairly low for a Marvel movie, and a large chunk of the film largely involves spending time with our heroes). It's also admirable that the film doesn't shy away from the fact that, to varying degrees, all of our heroes are in some way anti-heroes, or perfectly willing to perform selfish, dangerous or questionable acts for their own immediate gain (even if on the bigger issues their hearts in the right place).

It’s clear what type of movie you can expect right from the opening credits, where the camera focuses on (adorable) Baby Groot dancing to music in close-up, while (out of focus) our heroes combat a space monster in the background, each of them at key moments interacting with Groot in a way that demonstrates their character. It’s a lovely, witty way of opening the movie (perfectly scored to ELO’s Mr. Blue Sky) and firmly states that character and personality will be central. Baby Groot is, by the way, possibly the star of the movie, Gunn making sure the character isn’t overused or becomes wearing. The film gets the tone more or less right: it would be easy for this to feel like a private party we’ve been invited to watch, but it just about feels inclusive enough (and avoids smugness or self-satisfaction at its own wit) to remain charming and fun.

The focus is so much on jokes and fun that the actual plot of the movie is a little bit weak: a (predictable) villain reveal is made late-on, seemingly to give the film an antagonist. The actual plot content of the film is pretty lightweight. What plot there is, is nothing new (Daddy issues, spliced with Universe-in-peril) I’d also say that the films length is probably a bit too much – considering not a lot really happens, the film takes a long time to do it – it could do with a bit more discipline in the editing room, and a bit more willingness to trim out some of the material. This is, however, not a major problem –– and the film just gets away with it because it gets the character moments so right you simply enjoy spending time with this group, even if what they are getting up to is little more than a second-rate episode of Star Trek.

Where Guardians 2 falls a little bit flat is the wearily on-the-nose “emotional” sections of the script. While in the first film much of this goes unspoken, here several scenes are featured where the characters carefully spell out their feelings. The most egregious examples are an almost laughably overplayed game of catch between Peter and his Dad, and a terrible “everything spelled out” conversation between feuding sisters Gamora and Nebula. Whenever this film goes near this emotional content, its points land with heavy punches, while coating the content with sticky sentiment that gets “bad laughs” from the audience. The film has plenty of well-crafted and funny impact lines, but its script rushes through the areas where depth is needed, and doesn’t seem to trust the audience to understand the emotions that underlie the bickering between the characters, or that some of them may be tempted to do terrible things to fulfil their emotional needs. Only the final sacrifice of a character really works – and that’s because it is the only emotional connection that is quietly built in the background of the movie, rather than in the foreground.

But that’s probably a movie trying too hard for good reasons, rather than bad. There is more than enough here to recommend the film. Interestingly, Pratt’s Peter Quill is largely sidelined for chunks of the film (the fact that its nominal plot is all about Quill and he feels like a supporting role tells you how weak the plot is) so other members of the cast really stand out. Saldana has a slightly thankless role as the “Big Sister” of the group, but manages to bring a lot of unspoken depth to her role. Bautista provides excellent comic relief as Drax (though his lines are such gifts, it would be hard to screw them up), Baby Groot is very funny, Cooper’s Rocket has a juvenile, rebellious attitude that  that deserves a more interesting subplot. Surprisingly though, the film is repositioned more as a redemption journey for Michael Rooker’s space rogue Yondo, and Rooker delivers a surprisingly emotional performance as a confirmed killer and thief struggling with his conscience. Gunn allows him contemplative moments that really ring true within the chaos of most of the rest of the film, and this feels like one of the best displays of simple “acting” you’ll see in the MCU.

Guardians 2 is not a perfect film, and I suspect its weak plot, predictable and uninteresting villain, and often ham-fisted emotional moments will grate more and more once the exuberance of the ride has worn off on the second or third viewing. But it’s got a lot going for it: genuinely funny jokes, an intention to entertain which it largely succeeds in, some charming performances and enough action in it without letting that overwhelm the film. It’s a rollercoaster rather than a gift that will keep giving, and it lacks the first film’s well balanced plotting and world-building, but it’s entertaining and a great deal of fun (if 20 minutes too long) and the final reel’s sad events do carry an emotional weight (because they are based on largely unspoken feelings) that will stay with you after the film wraps. Not as fun as the first one - but still better than many others.
Email ThisBlogThis!Share to TwitterShare to FacebookShare to Pinterest
Labels: 2017, Action Films, Bradley Cooper, Chris Pratt, Comic books, Dave Bautista, Elizabeth Debicki, James Gunn, Kurt Russell, Marvel Franchise, Michael Rooker, Sylvester Stallone, Vin Diesel, Zoe Saldana