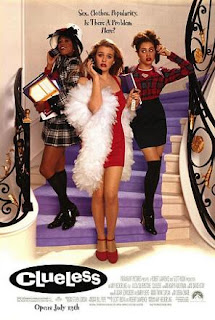 The 90s saw a rash of films that reworked classics into US high-school settings, aimed squarely at the teenage market. One of the most successful of these was Clueless: a decent, just-smart-enough reimagining of the plot of Jane Austen’s Emma.

Austen’s wealthy, match-making heroine here becomes Cher Horotwitz (Alicia Silverstone) – queen bee of the in-crowd in her high school. Like Emma Wodehouse, Cher is smart, beautiful and taken to meddling in the lives of those around her, sure she knows best about how they should behave – and whom they should date. She can be selfish and self-obsessed, but beneath it is fundamentally good-natured. When new girl Tai (Brittany Murphy) arrives at the school, Cher sees the scope for a makeover project – but it’s Cher herself who undergoes the greatest transformation.

The obsessions with status that populate Austen’s world actually translate very well into the high school setting, with its in and out crowds. It also a very neat restructuring of the novel, hitting all the basic plot points of Austen’s story, with some smart translations into the modern world (Christian – the Frank Churchill role – is particularly well updated). The film is sprinkled with sharp lines and snappy dialogue exchanges, and the cast are certainly in on the joke, walking a fine line between parody and playing it straight. This all contributes to the film’s fizzing energy and its charming momentum – you can see why teenagers loved it, as Heckerling has a wry wink at the camera at the concerns of teenagers, but also celebrates their potential for fun and friendship.

Watching the film over 20 years on, it’s remarkable how successfully it used the limitations of Alicia Silverstone to such great effect. It’s a bit bizarre to think Silverstone was considered the next big star of Hollywood, considering how few of her films have made any impact since this. However, here her lack of depth and shading, her unmodulated voice and rather bland style somehow work perfectly with a character who is superficial and who believes she is far cleverer than she actually is.

Clueless is that strange thing – a star-making turn that didn’t make a star, but Silverstone clicks perfectly into this role, making Cher engaging and rather charming despite her self-obsession. She delivers what the film requires in spades, even if Cher’s late character blossoming seems something required for the film’s plot rather than growing truly organically over the course of the film.

This abrupt burst of “learning and growing” partly clunks because Heckerling shies away from Emma’s more negative characteristics – tellingly, Emma’s public shaming of another character is here given to a different character. Can’t have anyone not liking the heroine for a second can we? In fact this determination to make Cher constantly as likeable as possible does rather miss the point of the original novel. It also reduces the “tension” (we all know how stories like this end!) of whether the heroine has driven her love interest away through her mistakes and missteps – and with less for the heroine to learn about herself, and less damage to repair in the relationship with the object of her affections, there’s proportionally less emotional impact to the final happy ending.

Speaking of that romantic plotline, you also can’t talk about the film without also commenting on the fact that it makes a bit of a fudge around the attraction between Cher and Josh, who (the film is at very great pains to point out) are not actually siblings, but do share the same father/step-father. It’s actually quite a weird twist, but I suppose just as retrospectively unsettling as Mr. Knightley loving Emma from afar from a ludicrously young age. It’s funny though to watch the film fall over itself to hammer home the non-family relationship between the two characters early on, so we don’t start shrieking “incest” by its conclusion.

All in all, the film – like its heroine – is a sweet, but superficial, candyfloss concoction, without the depth that could have lifted it from pleasing popcorn fare to satisfying story.
Email ThisBlogThis!Share to TwitterShare to FacebookShare to Pinterest
Labels: 1995, Alicia Silverstone, Amy Heckerling, Breckin Mayer, Brittany Murphy, Dan Hedaya, High school drama, Jane Austen, Paul Rudd