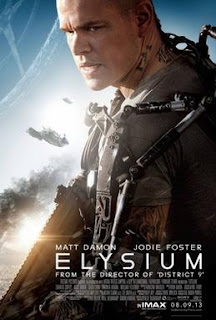 In a dystopian future, the world has become polluted and overpopulated. The rich and privileged live on Elysium, a massive orbital space station with an Earth-like atmosphere where medical equipment can cure anything. The masses on Earth yearn to join Elysium, many resorting to black market routes. Max da Costa (Matt Damon) is an ex-thief who contracts a lethal radiation infection at work. With little choice, he agrees to take part in a dangerous data heist (wearing a suit that enhances his physical abilities) in return for a black market trip to Elysium. But his heist crosses the plans of Elysium’s ambitious Defence Secretary (Jodie Foster) and her ruthless black ops operative Kruger (Sharlto Copley).

The design of this world, as per District 9 (to which this feels almost like a spiritual sequel), is impressive and really captures the visual clash between third world poverty on Earth and the paradise in the sky of Elysium. The sense of a society firmly divided into the haves and have nots is (at first) very well sketched out. There is the potential for a compelling us-against-them narrative ready to burst out, and Damon’s character seems positioned as “our champion” to bring down the system.

This is actually a really neat concept for a movie. What it’s crying out for, though, is more than the by-the-numbers execution it gets here. I suspect there were struggles between Blomkamp’s interest in putting social issues side-by-side with sci-fi action, and the demands of “the money” to get more Damon Bourne-inspired chaos on the screen. Either way, after the initial set-up the movie goes nowhere in particular. A lot of world establishment is needed here (I’ve just struggled to explain it in one paragraph) and the film doesn’t get the balance right between setting this up and then getting into the story – it’s a good 45 minutes before the story starts and 40 minutes later the film is more or less over. I’ll give it credit that the short runtime does mean it goes nowhere fast, but it’s still a pointless destination.

Anyway, the problem that cuts to the core is you don’t really care about anything. Copley brings charisma to his heavy role, but the character is a formless one who engages in any act of villainy the film needs him to do. Foster’s cold (English accented?) bureaucrat similarly never fully comes to life, despite her best efforts. Braga is a thinly sketched bit of human interest. The film is crammed with decent actors who were obviously attracted to some sort of idea behind the script – it’s just a shame that whatever got them worked up about the material never made it to the screen.

Damon’s character is key to this: he should be someone who finds his feet as the champion of the oppressed, who makes decisions and sacrifices that initially at first seem to be out the scope of his understanding of the world. The script pushes him towards this but it never feels real – we never get to know him (either before or after the event that changes his life) and we never get a sense of him being driven by anything beyond his original narrow aims until the film suddenly calls on him to make a series of huge sacrifices. It just doesn’t feel true: the film doesn’t take us on a journey with him, meaning the end lacks satisfaction. I’ll also mention in passing that, among the poor, downtrodden, entirely-Latino urban classes, the lead is the only white character – and yet he too has a Latino name, which to me suggests a certain level of white-washing for box office.

Instead this is a poorly sketched out bit of faux-thinking sci-fi, that sketches out a dystopia that never really makes any sense (it seems easy to cure the population of the world, but the inhabitants of Elysium never do – surely some sort of reason other than apathy might have added a bit more believability to this? Perhaps if more had been made of the need to depopulate the Earth?). Instead it’s a crapsack world for the sake of it, and the characters move through a series of events that happen but never engage us.

It’s sad, as this could have been quite a little B-movie classic. Perhaps the best review of the film comes from Blomkamp himself: “I feel like I fucked it up, I feel like ultimately the story is not the right story. I still think the satirical idea of a ring, filled with rich people, hovering above the impoverished Earth, is an awesome idea. I love it so much, I almost want to go back and do it correctly. But I just think the script wasn’t… I just didn’t make a good enough film is ultimately what it is. I feel like I executed all of the stuff that could be executed, like costume and set design and special effects very well. But, ultimately, it was all resting on a somewhat not totally formed skeletal system, so the script just wasn’t there; the story wasn’t fully there.”