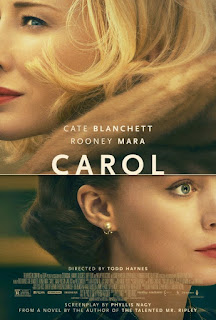 It’s the way of things that gay love-stories in Hollywood are invariably relegated to a sub plot – often one that has a certain tragical element to it. This is not the case here in Todd Hayne’s superlative romance, which places a lesbian love story at its centre, sensitively building the characters and romantic journey between them.

Therese Belivet (Rooney Mara) is a lost department store worker, drifting through life. One Christmas, working on the toy stall, she recommends a toy for the daughter of socialite Carol Aird (Cate Blanchett). A spark of attraction between the two is immediately apparent, and Carol invites Therese first to dinner, then to spend an evening together and finally a Christmas road trip across America, during which their attraction grows and deepens into a flourishing love.

This wonderful love story, almost a twist on Brief Encounter, is a brilliantly done, extremely engrossing and moving romantic film, a film that manages the rare feat in Hollywood movies of not making a homosexual relationship something that requires narrative punishment. Haynes’ luscious 1950s filming style, stressing the aesthetics and manners of the era, combines brilliantly with a subtly murky photography style that darkens and lightens at different points to create an immersive fairy-tale quality. It’s a perfect tapestry for a deeply caring and sensitive story, anchored by a superb script and wonderful performances.

It has now got to the point where it is axiomatic to say Cate Blanchett gives a wonderful performance – she is, after all, one of the best actresses in the world right now. She is quite simply perfectly cast as Carol, her features having the flexibility to appear both cold and distant and soft and caring, a switch she is able to make with the slightest of gestures. Her patrician manner is deconstructed brilliantly. Her character is initially established as an almost predatory figure, a determined and manipulative woman; it’s only over the course of the film that this persona is slowly taken apart, revealing waves of emotion and pain from years of denial, loneliness and a sense of being trapped. Each scene slowly prompts us to reassess and reevaluate her character, and Blanchett handles this journey with astounding skill, revealing a hinterland of pained, self-doubting isolation and desperation to experience real love behind her cool and confident exterior. It’s a performance of phenomenal skill and emotional force.

It’s matched brilliantly by Rooney Mara as the object of Carol’s affections – and it must be said at the very least a co-lead of the film. Therese is a woman sleepwalking through life when we first see her, trotting through the motions of her interactions with others – a clear void in her, waiting for something to happen to her, but clearly with no idea of what that might be. Similar to Blanchett, Mara’s gentle and sensitive exterior deepens over the course of the film as she becomes more assertive to those around her, more of a determiner of what she wants from her own life. Mara’s soulful eyes and gentle face make her a perfect audience surrogate, creating a character whose feelings, doubts, anxieties and growing confidence we become immersed in. The film is in many ways her story, and Mara’s expressive gentleness is vital to our investment in the story.

The road trip at the heart of the movie’s plot is a charming, lyrical dance between two people juggling an unspoken attraction: one of them on the edge of all times of saying it, the other drawn towards an attraction she is still trying to understand and express. Haynes perfectly captures the small playful moments of first love that pepper these scenes, the camera intimately placed to make us part of this growing partnership of equal minds and hearts. Slowly they grow physically closer – both in their ease of body language, and through their slow progress towards sharing hotel rooms and finally (in an achingly romantic scene) a bed.

It’s a film about romantic longing between two people, the instant attraction. Therese’s first glance of Carol is across a crowded room, with the camera panning past Carol in a POV shot and then returning to her, before cutting back to Therese, now seemingly alive with an attraction she doesn’t quite understand. The Brief Encounter structure of the film is established with the film opening with Carol and Therese’s (possible) last meeting in a dinner. We see their interrupted conversation leading to Carol’s departure, leaving after touching a hand on Therese’s shoulder – the camera lingering on Therese’s back and her unseen reaction (and contrasting it with a meaningless similar touch from a male friend). When this scene is replayed later, we see it more from Carol’s perspective – and her pulsating emotion and longing.

The reason these scenes work so well is that the film continually shows Carol and Therese struggling to hide their growing attraction in plain sight, to maintain the balance between expressing their feeling and keeping a plausible deniability. This feeling grows because the film has the patience to take its time with building this relationship– and because we are aware of Therese’s feelings earlier than she is.

The film’s sensitivity extends to the sympathy it feels for all its characters. As useless as many of the men in the story are, they are confused, distressed or lonely rather than malicious or cruel. Carol’s husband Harge could have been a bullying monster, but he actually comes across as a frustrated and deeply hurt man, who understands on some level his wife’s sexual preferences, but is unable to fully comprehend the implications of this. On paper it’s a thankless part, but Kyle Chandler is superb, his Mad Men features perfectly suited to the role of floundering masculine figure. Many of Therese’s would-be suitors are similarly drawn reasonably sympathetically, however laddy, over-keen or dull they may be – Haynes’ film has an understanding that they are products of their time. In a lovely scene Therese talks about homosexuality with one of her male suitors, who can barely countenance its existence, as if she was talking about the man in the moon.

Haynes’s mastery of the aesthetics of the material is present throughout. Haynes increases the feelings of being trapped or surrounded by a number of shots through windows, using mirrors, from the other side of doors – divides that stress the characters’ sense of being trapped and enclosed in their lives. He also carries across just a small teasing touch of the melodrama of 1950s films – though I would argue this is no way a melodramatic film – with a gun making a deliberately misleading appearance, and a few beats that briefly suggest the film is heading in an entirely different direction.

Carol is a wonderful, soulful and entrancing film. It’s about two people showing each other hidden depths about themselves, uncovering truths and building each other’s capacity for love and ability to admit and understand their feelings. It makes this a tender and endearing film, with two characters whose fates we become completely involved with. It also avoids passing any form of judgement over any of the characters. Filled with subtle moments, open to interpretations (even their first meeting is full of code, from the recommendation of a non-gender-conforming train set to Carol’s gloves left invitingly on the counter) that constantly ask us to review how open we feel the characters are being with themselves and others. With brilliant performances by Mara and Blanchett (backed by Chandler and a very sensitive performance from Sarah Paulson as Carol’s former lover), this wonderful film is both profoundly moving and very uplifting.
Email ThisBlogThis!Share to TwitterShare to FacebookShare to Pinterest
Labels: 2015, Cate Blanchett, Kyle Chandler, Romance films, Rooney Mara, Sarah Paulson, Todd Haynes