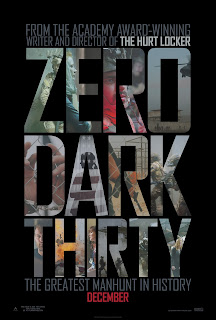 Zero Dark Thirty is a deeply troubling film: a journalistic investigation into the hunt for Bin Laden, shot with an action thriller film ethos. It wears its factual accuracy and research with an ostentatious pride on its sleeve, but ducks out of making any judgement on the issues it presents, as if afraid to pollute the events it displays with editorialising. But some events demand discussion and a point of view: as one critic said, you wouldn’t make a film about slavery that focuses on the cotton output. Similarly, a film that drives us towards the killing of the vile Bin Laden should also challenge us more about the methods used to capture him, the extent to which we "became what we hunted".

And I don’t buy that the film is challenging us to recognise this ourselves. It starts with recordings from the 9/11 flights (a moment which made me feel uneasy to say the least and many family members were also unhappy with), its lead character Maya is caught up in two bombings and an assassination attempt, her best friend (well played by Jennifer Ehle) is killed in a suicide bombing. All of this, along with the film’s omission of any exploration of the terrorists themselves, is encouraging us to look at a particular side of the argument. Cementing this is the end of the film which, despite caveats, has a “mission accomplished” feeling – it may not be flag waving, but it does want us to feel the professionalism of a job well done, reinforced by the tearful release of 12 years of tension from Maya. We are not being encouraged to question the attitudes or assumptions of the characters in front of us; we are being steered towards a particular view of these characters and events. Without an explicit endorsement, but implicit suggestions that ends may well have justified means.

Of course, 9/11 was an abomination – but setting the deck the way the film does means it makes it easier to condone the terrible things that the CIA do in this film to get the results it got. That’s the problem with the film’s “stanceless stance” – its patting itself on the back for not taking sides means it doesn’t acknowledge any depths to its facts, it gives no context. There are many, many issues and motivations, from both sides, behind the events we see here – but we don’t learn anything about any of them. Instead the film is like a Wikipedia page with brilliant photography and editing: a skilfully presented PPT deck that shows us what happens, but doesn’t feel like it tells us anything about why or how it happened.

Torture is of course the main issue here. The film opens with a gruelling extended torture sequence of almost 25 minutes. The information it yields directly is questionable, but it does eventually lead to a crucial name, which is backed up later by Maya watching videos of others undergoing “extreme interrogation” and saying the same name. Now, torture in something like 24 feels different: there at least (a) the whole world was a cartoon, (b) the danger was immediate ("a nuclear bomb will go off in thirty minutes dammit!") and (c) there was a sense of conflict in its perpetrators. Neither is the case here.

That’s not a defence of 24, but here it’s full on psychological and physical assault over a sustained period of time with no identified imminent threat and no real sense that the torturers feel they are doing anything wrong (I guess the film is suggesting they have become deadened to it, but still would it hurt to say something along those lines?). And it actually happened, and not just to bombers and terrorist kingpins, but (in this film) to couriers and bankers. Surely that demands some sort of acknowledgement in the film that it was wrong? Instead the film fudges this and the torture of suspects is shown to contribute in some way to the successful delivery of Bin Laden; there is no real questioning of whether the value of the information it directly obtained justified its use.

Part of the problem of the film is that it was originally commissioned as a film about the hunt for Bin Laden – the US actually finding him rather screwed up the narrative. There are elements of that original film in there: a hunt for a chimera, an obsession with one man that blinds us all to the bigger picture: “You're chasing a ghost while the whole fucking network grows all around you” Kyle Chandler’s character cries out with frustration at one point. Maya (and the film) slaps him down – it never questions whether Bin Laden was worth the focus and expense. But it hints at the repurposed nature of the film, which would have had to tackle this question head on before Bin Laden was found. Was this the best use of their efforts? Was there a benefit to the war on terror outside of the satisfaction of punishing Bin Laden? How in control was Bin Laden of the jihad by then?

It feels to me that this film is two films uneasily mixed together. One film wants to explore the nature of obsession, and wants to question if it’s worth catching one man at the cost of diverting attention from hundreds of others. The other film is a triumphant story of patience and dedication rewarded. You can’t help but feel that a film released prior to Bin Laden’s killing might have been a more interesting and profound piece of work, which could have looked at the nature and cost of obsession. Instead, history itself pushes the film into saying “well it had ups and downs but the ends justified the means eventually”.

None of this doubt about the final film is of course an apology for the appalling crimes of Bin Laden and his followers. And Zero Dark Thirty is, however you cut it, a very well made film and Bigelow is an extremely good director. Jessica Chastain invests a character almost devoid of personality, about whom we learn almost nothing, with an emblematic depth that makes her feel like a profound embodiment of American determination and will, like some sort of morally conflicted female Gary Cooper. The film also does feel like it has something to tell us about an America under siege – although again, by shying away from editorialising, it loses the chance to present a specific commentary on how 9/11 affected the country, and its sudden sense of vulnerability and unease in the world.

It’s a troubling film, a film that seems to be dodging taking a moral stand on areas. It could still have said “some of things that were done were bad but the end result was good”: that would have been fine. But by not making any statement at all, it feels like it’s dodging the issue, not challenging us.
Email ThisBlogThis!Share to TwitterShare to FacebookShare to Pinterest
Labels: 2012, Chris Pratt, James Gandolfini, Jason Clarke, Jennifer Ehle, Jessica Chastain, Joel Edgerton, Kathryn Bigelow, Kyle Chandler, Mark Strong, Post 9/11, War film