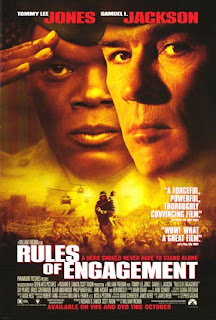 Jones and Jackson together! At least that was the cry at the time for this morally repugnant military courtroom drama. On a mission to rescue an ambassador from an embassy under siege, after a few marines are wounded (three are announced later as KIA), Jackson’s Colonel fires on a crowd of protesting civilians (a scheduled protest that has gone out of hand) killing 83 and wounding dozens more. Horrified, the suits at home decide to put him on trial for murder. Jones is his alcoholic (for plot reasons) lawyer, who tries to uncover the truth around a missing surveillance video which may (or may not) prove the crowd was armed.

This was a film that I think I’ve hated more and more since I watched it. In its defence: Friedkin directs the opening embassy siege well. The siege itself (denounced as racist at the time) comes across as enormously prescient considering the Arab Spring etc that we’ve seen since. Jones is pretty good, I guess, despite looking far too old for the part (he’s only two years younger than his supposed mother!). Jackson does the fireworks that are asked of him. It’s pretty well filmed in general.

Everything else in this film leaves a taste like three-week-old field rations. The courtroom dynamics are boring. The film doesn’t want Jackson to be a villain so repositions Greenwood and Kingsley’s characters as villains. Despite their best efforts, any sane person watching this film could not defend Jackson’s character’s actions here. The logic of the courtroom is ridiculous: a non-existent video tape overrules all other evidence, including a complete lack of bullet holes from guns from the street direction? I suppose you could argue the film wants us to make our own judgement on subjective recollections: but its stirring music and heroic worship of Jackson tell us firmly who we should be believing here. Basically the message seems to be: Embassies are American soil, raise a gun at them and you deserve everything you got coming.

The film tries to stack the decks overwhelmingly in support of its central character, but it just leaves an unpleasant taste in the mouth. For a start, our hero is cleared on a technicality – “There must be a surveillance tape and that tape might have cleared the Colonel so you should let him off” – that we are meant to cheer, but is in fact exactly the sort of closed ranks, protect-our-own cover-up that the supposedly villainous National Security Advisor denounces in the first place. It’s not even a good argument: all the actual available evidence clearly shows he’s guilty and Jackson even admits it on the witness stand! Ever heard of the Amritsar massacre? It’s a comparable event to this and one of our most shameful colonial actions. On the logic of this film it should be our finest hour.

On top of that, the film asks us to believe that a proportional response to being under fire from gunmen in a crowd full of civilians (including women and children) is to fire automatic weapons directly into the crowd. But that’s fine because Jackson’s character has a dream where he sees the Yemeni civilians all shooting up at him (didn’t see that the first time you showed it Friedkin!) including the photogenic one-legged girl the film has gone back to several times. So you go Samuel! Shoot up that crowd!

I could go on with the wonky morals of this horrible little film. The first thing we see Jackson’s character do on screen was to execute an unarmed prisoner (our hero, ladies and gentlemen!). Naturally the film has to exonerate him for this, so we have the Vietnamese officer who witnessed this turn up at the courtroom and say he would have done the same, then have the two of them tearfully salute each other outside the courtroom. So that’s fine then. It’s just another part of the film’s unpleasant attitude that you can’t even begin to question right or wrong in combat because, man, you weren’t there. Well I’m sorry but that doesn’t wash.

What is the moral of this unpleasant story? Well it seems to be that you can do almost anything you like so long as you can argue you have in someway saved lives (especially if they are American lives). Oh and that by extension, 1 American Marine’s life is worth just about 28 Yemeni lives. Go figure.
Email ThisBlogThis!Share to TwitterShare to FacebookShare to Pinterest
Labels: 2000, Ben Kingsley, Bruce Greenwood, Courtroom drama, Guy Pearce, Samuel L. Jackson, Tommy Lee Jones, William Friedkin