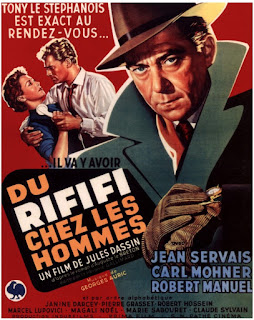 After you’ve spent some time watching some pretty duff films, finally sitting down and watching a masterpiece of any genre is a complete relief. That’s pretty much what this film is. Which is particularly interesting when you learn the film is based on a book that Dassin (it’s director) described as one of the worst books that he had ever read. He took the job only because (with his blacklisting in Hollywood) he was worried he would never work again, and only on condition that he could completely restructure the original script.

Newly released from prison, Tony (Jean Servais) is approached to take part in a smash-and-grab raid on a jewellery store by his old criminal contacts. He rejects the idea, but after discovering his former lover has left him for a gangster rival in his absence he changes his mind, on condition that the smash-and-grab plan is replaced by a complex operation that will clear out the shop’s safe containing over 250 million Francs’ worth of jewels. But in the criminal underworld, they discover there are always bigger fish circling to take their cut by any means they can.

I watched this film three days ago, and its effect was so lasting I feel almost as if I have watched it several times in my mind’s eye since then. Jules Dassin, an under-rated director, has a mastery of visual language and tense narrative that burns nearly every single scene into your retina. Rififi is a technically assured, dazzling piece of cinema that gives heft and weight to a simple story, and also has something interesting to say about human nature and the codes that dictate the lives of thieves.

Any discussion of the film probably needs to start with its highlight: a 28 minute sequence detailing the robbery itself, told in near silence and shot with forensic detail. In fact, so intelligently thought-through was this scene that in many countries it earned the film a ban, as it was feared it was too much of a “how-to” guide for thieves. The scene is a unique creation of Dassin’s – the comparative scene in the book is no more than 2-3 pages. Here it’s a quarter of the movie. The movie is here but check sequence out at around 45:00.

The scene is blisteringly tense, and the decision to keep the action silent means every single noise (a piano key, the whirr of a drill, the bang of a hammer) carries huge tension. There is, as many reviewers have noted, no particular reason for the thieves to keep to strict silence – but it’s dynamite cinema. Dassin combines this tension with a delighted observance of the ingenuity of these criminals. Everyday items are brilliantly repurposed to perform specific tasks (I particularly enjoyed the use of an umbrella as a vital tool). Dassin celebrates the effectiveness and skill of these burglars, and their technique and skill is infectiously entertaining.

Dassin probably invented the genre of the heist movie here – and he encourages us to feel a delight in the accomplishment and ambition of the heist. But he also reminds us that these are criminals: weapons are banned as they will guarantee a long prison stretch; the couple whose house they invade are ruthlessly chloroformed and tied up; a policeman is bludgeoned as part of the get-away. In the third act of the film we see that Tony in particular is no shrinking violet when it comes to violence.

The build-up to the heist establishes each of the characters clearly, along with the flaws that will revisit them later: Tony makes enemies too easily, Jo’s loyalty affects his judgement, Mario is too happy-go-lucky, César has a weakness for women. A number of sequences show us the gang’s preparations – from hours of surveillance, to an amusing sequence where they experiment with methods to beat the store’s top-of-the-line alarm before a moment of inspiration hits them.

The third act of the film however takes us into a dark exploration of the loyalties and codes of honour that govern the criminal underworld. Tony’s enemies try to muscle in on the proceeds, leading to a series of increasingly violent episodes, as move and counter move is made to secure control of the funds. Here Dassin again pulls no punches – we have swearing, we have murder, we have a strung-out junkie kidnapping a child in return for a free hit – and it’s brilliantly put together.

It also tells us something. Tony has a code – and whether we agree with it or not, he’s faithful to it. Dassin himself plays the man whose fondness for a vain singer will leak out the plot details (it’s a lovely performance – and the man who was blacklisted must have had some delight here in playing a grass) and the confrontation scene with Tony is great: “I really liked you” Tony states sadly and regretfully: that doesn’t change his mind. Tony’s rival Grutter lacks even Tony’s sense of fairplay and his ruthlessness puts the other gangsters into perspective and questions Tony’s ideas of a code of honour among thieves: Grutter is a success precisely because he doesn’t give a toss about that sort of thing.

If the film has a flaw, it’s in its treatment of the female characters. Although Dassin arguably suggests that in this mileu many of them are just powerless passengers swept along by the actions of their men, they still seem less than fully formed characters, defined by simple character traits (Louise is a mother, Viviane is shallow, Ida is a flirt). The one dull section of the film follows Viviane singing in a nightclub – a scene introduced solely to drop the title and explain its meaning.

The film is also, at best, neutral in what it expects us to make of Tony brief whipping (off-screen) his ex-girlfriend Mado with a belt, after she betrays him with the gangster Grutter. Particularly as Mado seems to believe herself at fault rather than Tony. The scene is more about Tony – it’s his feeling of powerlessness that the camera focuses on – and Mado seems to shrug off the three blows she receives as just the price of living. Ah well, that’s the fifties for you I guess. And it’s not as if Tony – a moody man perfectly capable of cold blooded killing later – is a saint in any case. We also have the balance of Jo and Mario’s loving regard for their wives – and César’s misguided affection for Viviane.

And of course Tony our “hero” is certainly an anti-hero. In his first scene he’s stroppily demanding “in” on a poker game he doesn’t have the funds for. He’s demanding and surly with everyone except his godson. He is ruthless when he needs to be. Jean Servais’ crumpled, baggy face and dead-eyed stare genuinely make him look like a man who has spent five years inside. His adherence to his moral code is so rigid no level of regret will stop him punishing those whom he deems have deserved death. Dassin also undercuts his potential tragic greatness, as trivial events – a missed phone call principally – lead him to destruction.

The film’s final sequence is inspired, and again wordless. A dying man races a car through the city to return a child to his mother. Is it devotion to the child? Does he want to get the money back to the only family he has? Has he accepted death? Is he racing for a chance of living? Around him the camera whirls, the editing is frantic and the child cavorts in the car oblivious of the danger. It’s a sequence that is both moving and strangely profound. It’s the final masterstroke in a film full of them.
Email ThisBlogThis!Share to TwitterShare to FacebookShare to Pinterest
Labels: 1955, Film noir, French cinema, Jules Dassin, Tony Servais