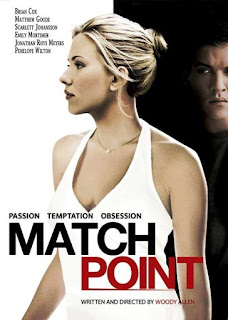 Match Point was originally intended to be filmed in New York, but Woody Allen could only raise the cash in Britain – so the location was shifted to London. The effect is a little bit like Julian Fellowes switching Downton Abbey to become a kitchen-sink drama in Liverpool: research has been done, the facts are all ticked off, but the understanding of the people and their situation just isn’t there. Maybe Allen should have hired Fellowes as a consultant. At least Fellowes could have told him an upper-class Covent Garden opera buff probably isn’t going to be in raptures about Andrew Lloyd-Webber’s The Woman in White.

Chris Winter (Jonathan Rhys-Meyers) is a tennis pro, now making a living as a coach in an upmarket London club. He coaches Tom Hewitt (Matthew Goode), and they discover a shared love of opera. Soon Chris is a regular visitor to the Hewitt family, a suitor and later husband to Tom’s sister Chloe (Emily Mortimer) and an employee at his father’s big city firm. He has everything he wants – except for Nola Rice (Scarlett Johnasson), Tom’s American actress fiancée…

The film was critically acclaimed in America but received a much more muted response here in Blighty. I can see why. Allen’s main problem is that he is tone deaf to the class hierarchy in this country. As such, he creates a Britain here that is close to something we would recognise, but subtly off. Chris is clearly from a lower social class than the family he marries into, he’s employed as a coach in a tennis club and he’s clearly less well travelled than the others. The family he marries into has a massive country house with servants, goes shooting at the weekend, runs a huge London business – it’s a modern day Downton Abbey.

If the same story was created by a British writer and director, Chris would clearly be presented as an ambitious, even ruthless, social climber looking to move up the ladder by doing everything he can to marry into a rich family and inveigling himself into their lives. Allen, however, doesn’t present the relationship like this – in fact, watching the film, I think it’s clear that he doesn’t really realise that Chris and his in-laws are in a totally different social class. He treats them all as if they are basically social equals, with money the only difference between them. For the British this just doesn’t fit in at all with our experience of the class system in this country – we know the Hewetts and Chris would always be aware of the social background difference between them, and that someone would comment upon it during the course of the film. No-one ever does. Class remains unmentioned. For a British person this just isn’t right.

So the “tragedy” if you like (or character flaw) of Chris should be that he is drawn sexually towards Nola Rice, despite it flying against his ambitions for moving upwards in his class. Instead, Allen’s script treats it solely as an affair of passion: the fact that the two “outsiders” in the social class (the working-class Irish boy and the American actress) are drawn to each other isn’t commented upon at all. The Hewetts are more suspicious of Rice because she’s an American and an actress, but the fact she (like Chris) doesn’t have a penny isn’t an issue. There is a lot of fertile ground here that any British director or writer would just know – but Allen fundamentally just doesn’t get it: he thinks the Hewetts are middle class not the loaded 1%+.

Of course, some of the problems are connected to Jonathan Rhys Meyers in the lead part. Watching him in this film, I can’t help but feel this is a solid 7/10 performance by an actor who normally bats a 5-6: he’s doing some of his best work on film, but his inadequacies as an actor can’t be overcome. It’s the eyes and voice for me: there just never seems much going on behind the eyes, and his unmodulated voice doesn’t bring any shading to his line deliveries. Chris should have the air of a slightly ruthless, ambitious but charming social climber – think Dennis Price in Kind Hearts and Coronets – but this is out of his range. Instead Chris is just a sort of blank that you can impose their own ideas on: it sort of works for the film, but it misses dozens of possibilities. He does well with the second half of the film and his guilt about the murder is well played, but it’s simply less subtle acting than is called for in the first half. He’s an average actor giving a performance above himself here.

Scarlett Johansson fares much better as a character who changes and develops dramatically over the course of the film, from mysterious, confident, sexy girlfriend to needy, frustrated, betrayed mistress. It’s a dramatic development throughout the film that is so skilfully done, it never feels jarring. Much of the cast is also strong: Matthew Goode is a real stand-out as Chris’ subtly spoilt brother-in-law, as is Emily Mortimer as a happy wife who never wants to think about the lie her life is. Rupert Penry-Jones and Margaret Tyzack have great cameos among the all star British cast.

The film takes place in a picture-postcard London (all the great sights are ticked off), and Allen directs with his traditional unfussy camera work. There is a certain pleasure to seeing big name British comic actors in tiny roles throughout (Paul Kaye, Mark Gatiss, Steve Pemberton and Alexander Armstrong among others pop up in small roles).

Allen doesn’t understand Britain like he does Manhattan, but that doesn’t mean it isn’t a decent film. The story’s theme of luck or chance vs fate doesn’t quite coalesce for me, but the feeling of events closing in on Chris late in the film does work very well, and I certainly felt the tension of whether Chris would get away with his eventual crime (even if I never really quite cared for Chris himself). Allen rates this as his favourite of his own films – which I guess goes to show you are never the best judge of your own work.
Email ThisBlogThis!Share to TwitterShare to FacebookShare to Pinterest
Labels: 2005, Brian Cox, Emily Mortimer, Ewen Bremner, Jonathan Rhys Meyers, Matthew Goode, Murder mystery, Scarlett Johansson, Woody Allen