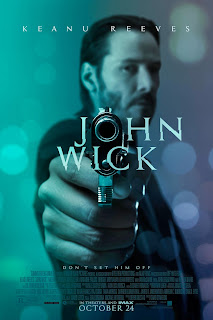 When B-list movie-making works, it can be a treat. John Wick is such a film. Set in a very distinctive criminal underworld, the recently widowed super assassin John Wick (Keanu Reeves) has left the life of crime behind but is dragged back in when the son (Alfie Allen) of a Russian mafia kingpin (Michael Nyqvist) murders his dog, a final gift from his wife. Wanting revenge for the loss of his last link with his wife, Wick undertakes a roaring rampage of revenge.

John Wick is a film all about momentum. It’s sharp and brutal, with fights and events piling on top of each other. However, it’s also a film told with quite a bit of wit and imagination – it’s got a cool sense of humour, and presents a tongue-in-cheek view of its super assassin story. The film’s pace and immersive action is punctured regularly and very effectively with amusing moments that really hit home. The idea of the criminal underworld having its own secret code, rules, havens and even currency is several times expanded wittily to bring an everyday element into the extraordinary. As an exercise in briefly and simply “building a world” you could look at few better examples than the script for this film.

Keanu Reeves is actually a fine choice for the lead role. His limitations as an actor have always been based above all in his flat and unmodulated Dude voice, so it’s only at moments of vocal emotion (there is one such angry outburst that he struggles with in the film) where even the audience feels that awkwardness of watching an actor at the limits of their range. But his best quality has always been his inherent lovability. As an audience member, you can’t help but care about him. Combine that with his physical brilliance and you have the perfect combination required for this role: you can believe totally in him as a ruthless killer, while also feeling a great deal of affection for him.

With Reeves’ physical abilities, the fights are then very well framed to showcase the fact that the actor is doing the stunts himself. If Quantum of Solace is perhaps the most inept example of high-cut frenetic action, this is at the other end of the scale totally. Simple, clear camera set-ups allow us to follow what happens at all times. Establishing shots and tracking shots show us exactly what is going on and where. This means you can relax and settle into the crackingly efficient violence that fills the film. The fights are inventive, shot with wit, and highly enjoyable in their execution without being excessively bloody or violent. The calm angles and stable camera serve to really accentuate the speed of those in the fights, making the fights visually very original. Despite the enormous body count, it never revels in violence. The patient build up to the first burst of violence also serves to really bond us to Wick’s backstory and his grief at his loss.

However, it’s not perfect. Strangely, despite the fact that the film is quite short, it’s still too long. There is a natural culmination point in the film at the end of Act Two that feels like a very natural, thematic stop point. Act Three resets the table hurriedly to reposition another character as a principal villain and to bring us another confrontation: this time however, the motives are less clear, and the action  just a little too much more of the same. It feels less witty and original than some of the other sequences in the film and to be honest I felt my attention drifting it a bit; the motivation for the final clash just isn’t there in the way it is with the initial enemies.

But this is a very enjoyable piece of pulpy film making, its wit and imagination embraced by some very enjoyable performances from the actors. The fight scenes not only have a unique look to them, they get the balance exactly right between violence and enjoyment. It’s almost the definition of a guilty pleasure .
Email ThisBlogThis!Share to TwitterShare to FacebookShare to Pinterest
Labels: 2014, Action Films, Adrianne Palicki, Alfie Allen, Bridget Moynahan, Chad Stahleski, Clarke Peters, David Leitch, Ian McShane, John Leguizamo, Keanu Reeves, Lance Reddick, Michael Nyqvist, Thrillers, Willem Dafoe