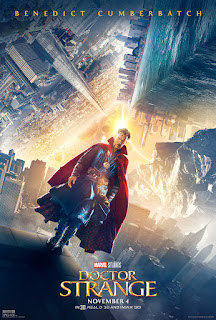 Arrogant surgeon (is there any other kind in the movies?) Stephen Strange (Benedict Cumberbatch) loses the fine motor control of his hands after a car crash caused by his reckless driving. With science unable to find a cure, he travels across the world to find another solution, eventually joining a secret group of sorcerers, led by The Ancient One (Tilda Swinton), who use energy from parallel universes to perform feats of magic in our world. Trained by Karl Mordo (Chiwetel Ejiofor) he is absorbed into a clash between the sorcerers and a rogue former protégé of The Ancient One, Kaecilius (Mads Mikkelsen) who wants to destroy the boundaries between worlds and unleash chaos.

In a film franchise that threatens to get increasingly samey, Doctor Strange is in many ways a breath of fresh air. Its twisting, mind-bending special effects (part Escher, part Inception) are stunning and showcase a great deal of visual and narrative imagination in the film, immediately making it look different from the dozens of city-smashing films we’ve seen in the Marvel franchise. It’s also told with a fair amount of wit, tongue-in-cheek beats and some lovely sight gags (Strange’s Cloak of Levitation is clearly inspired by the Carpet from Aladdin). This lightness of touch is essential to stop this concept feeling silly: with a more po-faced style this story, full of magic and things like “the Eye of Agamatto”, would have stumbled over its own ridiculousness.

This is however pretty close to being the best comic-book origins film, and certainly in the top five of this franchise. For a start, despite the visual glory, it feels like a focused more personal story: there are only really 6-7 characters (compare that to the sprawling cast of Captain America: Civil War), and the real heart of the film is the lead character’s struggle to overcome an existential crisis and find a new purpose while rediscovering his humanity. Even the final confrontation is a spin on the formula, avoiding city-wrecking super-punches in favour of intelligence and humour saving the day. It still crams in the action, and the characters are still cartoons made flesh, but at least they have been given a real depth here. There is an emotional weight to the story that makes you care about Strange and his world.

No actor right now is better able to embody intellectual brilliance matched with cool arrogance and societal disconnection than Benedict Cumberbatch. So in many ways, Strange is a part that falls well within his comfort zone. But Cumberbatch shows he can carry a major motion picture by making Strange a charismatic lead who grows and develops. Strange is deliberately unlikeable at first, but Cumberbatch invests him with an underlying vulnerability and a cocky charm that is increasingly broadened and shaded as the film progresses. Almost without realising it, you find yourself actually rather liking him halfway through (while still happy to give him a smack in the mouth for his cockiness). Cumberbatch is in almost every scene and carries the film effortlessly.

The film is dominated by it's lead character, but gives moments to the rest of the cast. Tilda Swinton overcomes the controversy of her casting by investing The Ancient One with both a serene wisdom with dark hints of anger and impatience bubbling under the surface. Ejiofor is good as an increasingly disillusioned mentor and Wong has some great comic beats. Mads Mikkelsen, one of the greatest actors in the world, is rather wasted as a villain who never becomes quite as interesting as you’d hope. Most misused is Rachael McAdams, whose character serves very little purpose other than “ex-girlfriend” – even the director, in an interview, described her role as being there to love him, so that we can see why we should love him.

It’s still a Marvel film, and it still follows the Marvel formula, however newly presented it might be. The arc of despair, rejection, slow progress, revelation, disillusionment, rallying and overcoming personal problems is pretty recognisable from everything from Thor to Iron Man. But it is enough of an inversion, it’s got a good enough script, it’s directed with enough focus on character as well as action, and it has a sufficiently good leading actor to lift and elevate the whole idea into something that feels richer while keeping it entertaining. It’s a very good comic book movie, and it’s trying to do something different, And it mostly succeeds.
Email ThisBlogThis!Share to TwitterShare to FacebookShare to Pinterest
Labels: 2016, Action Films, Benedict Cumberbatch, Chiwetel Ejiofor, Comic books, Mads Mikkelsen, Marvel Franchise, Rachel McAdams, Scott Derrickson, Tilda Swinton