Birdman (or The Unexpected Virtue of Ignorance) (2014) 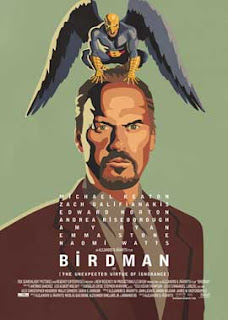 Oscar voters seem to be invariably drawn towards stories about actors and acting. Put together a decent and ambitious movie about those subjects, ideally with a sprinkling of gentle satire that pokes fun at acting but basically says at the end it is a noble profession, and you got yourself a contender. So it was with Birdman.

Riggan Thomson (a career revitalising role for Michael Keaton) is a faded movie star who hit celebrity 15 years ago with a series of films about a superhero, Birdman. Today he is trying to reclaim his artistic integrity by directing, adapting and starring in a Raymond Carver story on Broadway. At the same time he wants to rebuild a relationship with his daughter (Emma Stone), a recovering drug addict. The film covers the stumbling journey towards the opening night, with Thomson dealing with a demanding and difficult enfant terrible co-star (Ed Norton), a string of disasters and the haunting presence of his Birdman alter-ego, lambasting his choices and urging him to return to blockbusters.

I’m going to lay into this film a bit. It’s harsh, because it is really trying to do something different, for which it deserves credit. So I’ll start with the good stuff. The conceit of making the film look like it was done in one take is extraordinarily well done – the camera work is inventive and extraordinary. Emmanuel Lubezki is a visual genius and the technical accomplishment is astounding, a real tour-de-force. The acting is also very good. Michael Keaton embraces the best script he had in years, giving the part such commitment and emotion you overlook it’s a fairly simple part. Emma Stone is raw and tragic as his daughter. Ed Norton gives one of his finest performances as a dickish method actor (a neat self-parody) who in quieter conversations reveals real depth – and provides more insights into the passion for creativity than virtually anything else in the film.

Okay, that’s the really good stuff. It’s got some good lines as well, and its general style never stops being entertaining. But it’s also nowhere near as clever as it thinks it is. It wants to be a profound study of the nature of life and art, but it never really gets to grips with these ideas or drills down into them. For art, its contrasts are simplistic verging on hectoring. It never really gets to the heart of what acting is or means. For life it boils down into a straightforward “father wants to win back love of family” plot. The film presents all this as something deep and meaningful, and uses a lot of style and razamatazz – but the basic points remain simple or underexplored.

Part of my problem with the film is that is wears its pseudo-intelligence rather too heavily, and it ends up turning into smugness. Lubezki’s camera work is extraordinary but it also has a “look-at-me” quality that really begins to distract from the viewing of the film – even second time around the content of the film passes you by a bit. Tellingly, on the DVD Iñárritu talks about being drawn to the project because he wanted to make a film that felt like it was done in one take. Fine, but perhaps it would have been better if he had been a bit more interested in, say, the content of the film itself? Everything about the film-making demands you give it your attention, from the camerawork to the insistent drumming soundtrack. These elements are not bad in themselves – but it’s showing off rather than craft servicing the film.

The film’s themes themselves are, I think, also not as interesting or challenging as the film-makers believe them to be. The central idea of actors being shallow with chaotic home lives is so tired as to be a cliché: “Why don’t I have any self-respect?”/”You’re an actress, honey” summarises the sort of jokes you’ve seen before in other films.

I also felt the film’s attempts to analyse the nature of art and performance were formulaic and even rather empty. Lindsay Duncan plays a chilly theatre critic, determined to destroy the play, and Keaton delivers well Riggan’s rant to her on using labels and presenting opinions as facts. There isn’t any counterbalance to this offered, no exploration of, for example, criticism can service art or how opinion guides our reception of what we perceive as good art. A heavy handed fantasy sequence has his Birdman alter ego addressing the camera directly “Look at these people, at their eyes... they're sparkling. They love this shit.” Yeah Alejandro we get it, we are shallow and deep down prefer action films than all this “ talky, depressing, philosophical bullshit” – hardly an original thought, and hardly framed originally though, is it? Do we really need to be whacked on the head with it? What point is this trying to make that we haven’t heard hundreds of times before?

But then is it any wonder that it wants to try and make points about cinema rather than theatre? For a film set exclusively in a theatre, I don’t really feel that its makers really understand the pressures or nature of theatre. Instead, it merely stands in here as a short hand for “cultural worthiness” – Riggan might as well be making an independent film or writing a novel, theatre is just a counterpoint used for blockbuster films (a genre Iñárritu clearly does understand and has opinions on). Nothing in the film really seems to capture a real sense of backstage in a theatre or what putting on a play is like, for example Peter Yates’ film of The Dresser. There is no sense of the collaborative nature of the medium or its immediacy as a performance art - it's labelled as lazily as a vehicle for pretension and self loathing as criticism is for bitterness and failure.

The film also plays with the notion of Riggan’s (possibly) unhinged nature. Throughout the film we see him use superpowers – levitation, telekenesis, flight, control of fire. Along with his haunting by the Birdman character (done with a nice parody of the gravelly Christian Bale-Batman voice), it all ties into the possibility that Riggan is losing the ability to keep his real life and his career’s defining moment from merging into one another. The film’s ending builds on this, playfully suggesting some of what we have seen might have been real (though it also could be interpreted as a final dream sequence) – but I’m not sure what is gained by introducing these skills other than for visual flair. Riggan’s inner turmoil is never explored fully by the film and I don’t feel the film has the patience to explore his feelings or depression. As such, I find the open-ended ending doesn’t really add anything – it feels like it has been inserted to create debate, rather than acting as a culmination for your interpretation of the film, a la Inception say.

Phew. Birdman is by no means a bad film. It is a good one, but not a great one. It has much to admire, both on a technical and performance level, but (like Riggan) it is straining for an intellectual depth and thematic richness that simply isn’t there. It’s a showpiece, a brilliantly done one, really impressive to watch and it dazzles while it takes place – but there isn’t much to talk about afterwards. It is what it is. Compared to this year’s film-about-acting, La La Land, it’s both less charming and less profound, and has less to tell us about the compromises and struggles of real life. You can enjoy it, and it needs to be seen, but I can’t see it ageing well.
Email ThisBlogThis!Share to TwitterShare to FacebookShare to Pinterest
Labels: 2014, Alejandro González Iñárritu, Amy Ryan, Andrea Riseborough, Best Picture, Edward Norton, Emma Stone, Michael Keaton, Naomi Watts, Theatre films, Zach Galifianakis