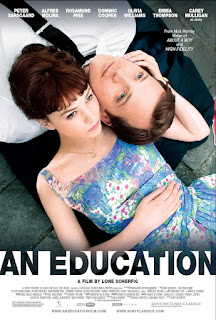 The education in question is the first sexual relationship of a girl who is 16 going on 17. Jenny (Carey Mulligan) is a schoolgirl and prospective Oxford candidate who finds herself winning the attention of charming older man David (Peter Sarsgaard). Jenny is swept off her feet by the world of classy bars, art and culture David introduces her to and begins to lose interest in her literal education: if all education can do is turn women into either lawyers’ wives or teachers what is the point?

Strangely for a film based on a man approaching middle-age taking advantage of a naïve and excited teenager, it’s strangely cosy and charming, with the whiff of “safe” family viewing. Nothing wrong with that of course, but the whole confection is just a little too slight, a little too well packaged, a little too carefully and thoughtfully put together to really leave a lasting impression. Instead it’s an enjoyable enough 90 minutes which doesn’t really have anything that stays with you.

What it does have going for it above all is the marvellous lead performance from Carey Mulligan. At the time best known for appearing in the Blink episode of Doctor Who, Mulligan cements her early promise by demonstrating what a charismatic and vibrant performer she is. Jenny delights in the ease with which David deceives everyone without it ever occurring to her that he might be lying to her, and this teenage arrogance could easily be smackably annoying – but Mulligan makes her deeply engaging and loveable. You want to protect her from making an irrevocable decision that will ruin her life at 16 (sort of the opposite to Bella in Twilight). But Mulligan’s endearingly engaging performance sweeps the audience up into Jenny’s fascination with the exciting life David seems to be offering, and makes you understand why she believes it to be a viable option. She’s a radiant centre to the film and it’s almost impossible to imagine it working at all without her.

It is in fact very well-acted throughout. Sarsgaard underplays the role, suggesting the underlying shallowness and weakness to David which is far clearer to the audience than the characters. The supporting cast are knock-outs: Rosamund Pike is hilarious as a sweet airhead, Alfred Molina embodies the gullibility of the striving middle-classes mixed with great reserves of unspoken love and affection, Olivia Williams is terrific in an underwritten part as Jenny’s concerned teacher.

It’s strange watching the film to see how it romanticizes the sort of behaviour that, if we encountered it today, would be denounced as grooming at best, paedophilia at worst. In fact, the film soft-peddles a lot of the unpleasantness of its characters: David and Danny, it is clear, are conmen and swindlers, though I suspect the film wants us to think of them more as charming rogues. I suppose it’s the impact of seeing the story from Jenny’s perspective, but some more outside commentary would perhaps have been interesting: it also might have been more interesting to see Jenny actually having to deal with the moral consequences of some of the actions that happen around her.

This is a slight affair, almost a shaggy dog story. There are many more things it could have explored (the swindling career of David, the role of women in the 1960s, the changing perceptions of “blue stockings” and their career options) but instead it settles for being a charming period piece. It makes no secret of the fact that, deep down, we are not meant to trust David and nothing in the plot ever really surprises you. It’s a gentle amble through an ill-advised teenage romance. But, despite all that, it’s very well acted and Carey Mulligan proves she was set to become a star.
Email ThisBlogThis!Share to TwitterShare to FacebookShare to Pinterest
Labels: 2009, Alfred Molina, Carey Mulligan, Dominic Cooper, Emma Thompson, Lone Scherfig, Olivia Williams, Peter Sarsgaard, Rosamund Pike, Sally Hawkins