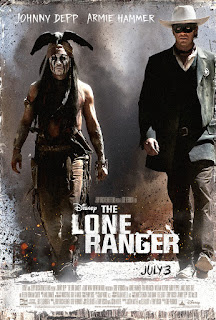 In 2013 this big budget misfire produced a record loss for Disney. Spiralling out of control the film cost a bomb then blew up like one at the box office much to the delight of film critics and audiences alike who enjoy nothing more than watching some suits and A-list stars fall flat on their face. Reviews were damning and the film took its place as one of the ultimate box office turkeys.

All of which is a little unfair, as to be honest this isn't really that bad a film. Which is not to say it's that good either, because it ain't. It's an average B picture with a huge budget and an over inflated running time, but it has a decent Act 1 and Act 3 and ends with an excellent train chase sequence that I enjoyed so much I watched it again immediately after the film finished.

So what are the problems? The main one for me is Johnny Depp, who here is at the absolute peak of his wave of replacing acting with a bunch of mannerisms and quirky moments. This is one of the most irritating Depp performances on film, his Tonto a pile of odd costumes, muttered gags and winks to the audience. I can see Depp is amused, but I'm not sure anyone else is. I also suspect Depp announced this was how he was going to play the role and if Verbinski didn't like it he could get stuffed.

But other than that, Armie Hammer is rather sweet and endearing as the straight as an arrow Ranger, displaying a lot more wit than Depp's painted showing off. Ruth Wilson does her best with a truly thankless damsel in distress role. Tom Wilkinson, William Fichtner and Barry Pepper present three very different villains. Helena Bonham Carter gives a bizarre performance as a madam with ivory legs (yes you read that right.).

The film’s main problem is it is far too long and too poorly structured. The opening act is engaging and introduces the characters effectively with a decent action scene or two, but it starts to overdo its welcome after 40 minutes or so. A framing device of Tonto narrating the story to a child in the 1920s offers nothing more than padding and more Depp showing off. Act 2 meanders around slowly, working up to showing that all the suspicious people in the film are working together, draining the momentum out of the film. Shock baddie reveals are only surprising to those of us who have never seen a film before.

However the film is partly redeemed by its final 30 minutes, in particular an astonishingly high octane, exciting and fun train chase sequence, brilliantly cut to the Lone Ranger theme that gives every character a chance to shine and both grips the viewer and leaves them with a smile on their face. Shame the rest of the film can't match it, but it's still better than many others manage.

A single sequence doesn't make it a classic, and an engaging actor (Hammer) who creates a character that you care about doesn't keep the attention throughout the whole 140 minutes, but it's far from a disaster and much better than many successful big budget hits. Shame about Depp. And sorry for those who loved turkeys. This is just an average film. In about 10 years it will probably be getting a re-evaluation.
Email ThisBlogThis!Share to TwitterShare to FacebookShare to Pinterest
Labels: 2013, Armie Hammer, Box office bombs, Gore Verbinski, Helena Bonham Carter, Johnny Depp, Ruth Wilson, Tom Wilkinson, William Fichter