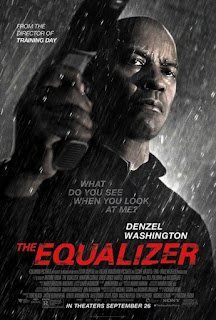 In the 1980s Edward Woodward had a sudden massive success in the States starring as Robert McCall, aka The Equalizer, a former agent of a Government Agency, making atonement for past misdeeds by offering his skills free-of-charge to help the innocent and falsely accused. It ran for four seasons and then largely faded from memory. As such, it seems a strange choice for Denzel Washington to bring back to life – until you remember that Washington has a fondness for appearing in trashy action films. Kinda like I have a fondness for watching them.

Because I'll be honest, this film is more or less exactly what you would expect from a film whose poster is the star male actor holding a gun (and, after watching this on Netflix and seeing my recommendations I am now aware how many films out there have posters of late middle age actors holding guns. Liam Neeson has a lot to answer for. Half of Hollywood's middle aged men should be paying him some sort of commission.)

Here McCall is reimagined as a quietly retired man, works at a hardware store, is beloved by his colleagues and in mourning for his wife, who of course he promised he would leave his old life behind. There are hints that he has a certain level of OCD, and meticulously times every action he carries out. Concerned at the poor treatment handed out to a teenage prostitute by her Russian Mafia pimp, he attempts to intervene politely but firmly – but of course a blood bath of slaughtered goons ensues, and before we know it the whole Russian mafia is trying to work out who our hero is and what he wants.

It’s a pretty familiar set-up and the film wastes no time in letting us understand it before hurling us into events that will shatter any peace its lead character has. After all we all know that this zen peace isn’t going to last and that Washington will soon be dishing out pain and taking names like nobody’s business. What the film does do quite well though is sketch out the everyday folk in the film so well (with only brief moments on screen of things like baseball games) that you actually do care for them, and you actually do understand why McCall finds this life so enjoyably unstressful.

The violence when it comes is very effectively filmed. It has a great “Bourne-ish” quality to it, as McCall uses a series of everyday items with lethal effect. The final sequence takes place in the very hardware store McCall works at, and there is some imaginative use of the various products contained therein. Similarly, throughout the film McCall uses various hardware items for purposes other than those intended by the manufacturer, and niftily cleans the items to return them for sale (a great way of junking the evidence).

My one issue with the violence in this film is that I felt, at times, it was a little too graphic, a little too delighting in its mayhem. It largely gets away with this as it establishes that the victims of the violence throughout the film are mobsters and killers. The film is also slightly too long – the momentum dries up in places – and the script or direction fails to deliver a single key ‘moment’ to make this stand out from the crowd of films in this genre. It’s entertaining and good fun for fans of the genre, but it never really seems completely original, instead an effective remix of things from other movies.

Denzel Washington is of course the film’s MVP, and he tackles the part extremely well, adding a great deal of depth to McCall’s shame at his past, his discomfort with violence and his need to carefully organise his life into time managed compartments. He has the quiet, cool confidence that the part needs and suitably manages to look normal enough that you can believe he would fade into the background. Of course he could do the part standing on his head, but he still gives it a lot of interest. Marton Csorkas also does a good job as his nemesis, though the part is paper thin.

The ending feels rather tacked on and designed as sequel bait – but there are far worse films out there that will get sequels. Decent fun, nothing special, an effective remix of other films.
Email ThisBlogThis!Share to TwitterShare to FacebookShare to Pinterest
Labels: 2014, Action Films, Antoine Fuqua, Denzel Washington, Marton Csorkas